Decléor are offering a free Hydration Trio gift when you spend £70 or more or a choice between Hydration Tria & Anti-Ageing On The Go when you spend £80 or more. Offer available from 00:01 Thursday 1st July until 23:59 Saturday 24th July. Discount automatically applied at the checkout.

Decléor are offering a free Simply Radiant gift with any purhcase over £70 from today, 17th June until Wednesday 23rd June 23:59. Simply enter the code at the checkout to qualify for this promotion.

Get 15% off sitewide at Decléor from 00:01am 7th June until 11:59pm 10th June. Simply enter the code at check to qualify for this promotion.

Get 15% off sitewide at Decléor from 00:01am 7th June until 11:59pm 10th June. Simply enter the code at check to qualify for this promotion.

Decléor are offering an amazing 25% off sitewide! There is no code required, discount is automatically applied onsite.

Decléor are offering an amazing free Discovery Collection Gift when you spend £80 or more! No code required, gift is automatically applied at checkout.

Receive your free Decléor Anti-Ageing Gift when you purchase 2 or more Rosemary Range products.Only available online 01/05/21 until 23.59 on 31/05/2021. No code is necessary to treat yourself with this fantastic offer. Discount automatically applied at checkout. PLUS receive free delivery.

Decleor are offering 20% off Aromessence Serums

Decleor are offering 15% off online when you buy one or more products on www.decleor.co.uk

Decléor - Spend £100 and Receive a Complimentary Wake Up and Go Gift!*

Decléor are offering an amazing complimentary Wake Up and Go Gift when you spend £100! Simply use the code at checkout to redeem! 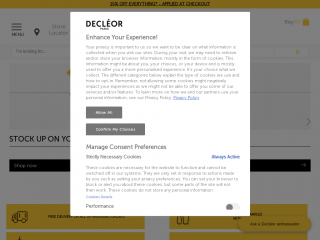 Being rare and therefore highly prized, aromatic plants and Essential Oils have been used successfully for thousands of years.

With their use documented amongst ancient civilisations for anything from religious ceremonies and as medicines to beauty preparations for skin and hair and even in cooking, Essential Oils formed an integral part of the traditions of most early cultures.

However, it was only in 1928 that the term ‘aromatherapy’ was actually coined. French chemist René-Maurice Gattefossé, who was working in his family’s perfumery business, became fascinated with the Essential Oils’ therapeutic uses after accidentally discovering that lavender oil rapidly helped to heal a severe burn to his hand.

Gattefossé was followed in his studies by French scientist and doctor Dr Jean Valnet who went on to treat a range of medical and psychiatric problems with the aid of Essential Oils. Marguerite Maury established the reputation of aromatherapy in beauty by opening the first aromatherapy ‘clinics’ in France, Switzerland and Britain.

It was a mere seven years after Maury’s death that DECLÉOR was officially born in Paris, becoming the first beauty company to actively begin uniting the science and art of using plant oils in aromatherapy products and treatments.