Being a hunter defines who you are. It’s in your blood. We get that you can’t always be in the woods...

We embrace a natural, holistic approach to health and beauty, and value equally daily nutrition for... 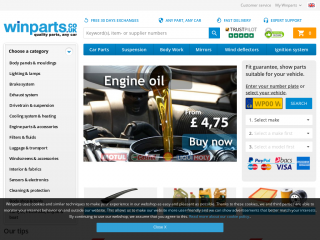 Winparts car parts is located in the north of the Netherlands. Winneweer, in the Groningen province to be precise. This is also where the name comes from: Win (Winneweer) and Parts (car parts). The ´van Essen´-brothers, Ari and Meinard, founded the company in 2005. There´s however a bit of history which precedes Winparts. Back in 1986 the van Essen brothers started D-parts in the city of Groningen. Here they started selling used BMW car parts. Their passion for car parts was caused by their own broken-down BMW E12. It soon became clear that it was difficult to find a replacement for their broken gearbox. Their only possibility was to buy a second-hand car. So a donor car was bought, the car dismantled and the gearbox was mounted in their own car. The other parts of the bought BMW were sold and D-Parts was born. In 1987 D-parts moved to Winneweer, expanding storage facilities enormously with a warehouse of more than 10,000m2.